More Gold Found at The Site of the SS Central America

I can already bet that someone is already starting to write the "Return to the SS Central America" - The shipwreck that keep giving!

It is with great pleasure that Austin Rare Coins can offer a few of the highly prized Gold coins from the S.S. Central America shipwreck. You can call a one of our Rare Coin Specialists to place your reservations or find some coins already available to purchase today.  Check our inventory here.


"According to the firm's press release, the gold recovered included five gold ingots and two Coronet $20 double eagles. One dated 1850 and another dated 1857-S. "

Unlike the exploration by the Columbus-America Discover Group of Ohio led by Tommy Thompson, who basically took the money and ran without giving the exploration team and investors their cut, the Odyssey will receive "80% of recovery proceeds until a fixed mobilization fee and a negotiated day rate are paid."  Once that is taken care of, they will divvy up the remaining 45%.

The SS Central America shipwreck was first found in 1987 at a depth of approximately 7,200 feet and less than 5% of the site was investigated. The current exploration should uncover much more since the tools and techniques for extensive archaeological excavation have vastly improved since 1987.

Greg Stemm, the CEO of Odyssey has ambitious goals of targeting "one or more shipwreck cargo recoveries each year totaling at least $50 million annually." The addition of the SS Central America should prove to be a rewarding endeavor, to say the least! 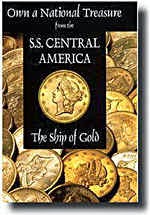 On September 11, 1857 the Central America sank in a hurricane in the Atlantic Ocean. It was one of the worst peacetime tragedies of not only lives, but also tons of Gold which were thought to be lost forever.

Amazingly, on September 11, 1988, exactly to the day 133 years later, the S.S. Central America was located by the Columbus-America Discover Group of Ohio led by Tommy Thompson. It took another year for some of the Ship of Gold's cargo of San Francisco Gold coins to finally be retrieved from the bottom of the ocean. Estimates of how much gold was on the ship when it went down have ranged as high as 10 tons.

It wasn't an easy task retrieving the Gold and it was even harder to keep the treasure that they found. Thirty-nine insurance companies filed law suits to be re-paid the damages lost to insure the ship. To make matters even worse Thompson, who sold salvaged gold bars and coins to a California mint for $52 million before going on the lam, remains a wanted man after failing to appear in an Ohio court in 2012. The 62-year-old seasoned sailor and diver is accused of cheating his team of nine technicians of at least $2 million, and they have been fighting for their cut.  No one can find Thompson, but the U.S. marshals are eagerly looking to do it.

Now "a contract has been awarded to Odyssey Marine Exploration, which is allowed to conduct more archeological recovery and conservation of the remaining shipwreck." [1]

According to Coin World the "Odyssey Marine Exploration announced on May 5, 2014, that it has recovered nearly 1,000 ounces of Gold during the first reconnaissance dive to the SS Central America shipwreck site on April 15. According to the firm's press release, the gold recovered included five gold ingots and two Coronet $20 double eagles. One dated 1850 and another dated 1857-S." [2}

Now, some 157 years later, you can own an authentic, historic piece of California Gold Rush history with these Shipwreck Gold Coins and Shipwreck Silver Coins.

References:
Go To Shipwreck.ws to find out more about the SS Central America and other Shipwrecks!

Posted by Unknown at 9:32 AM No comments: