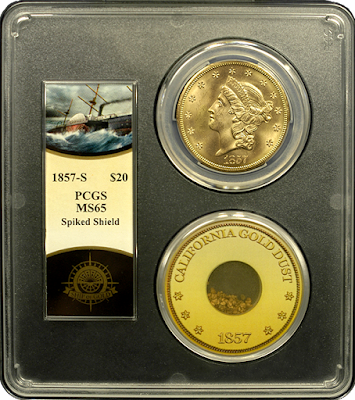 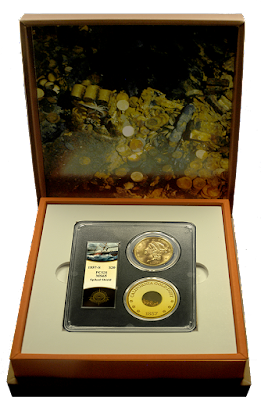 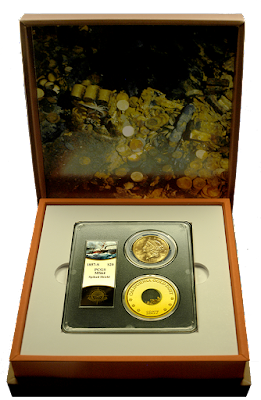 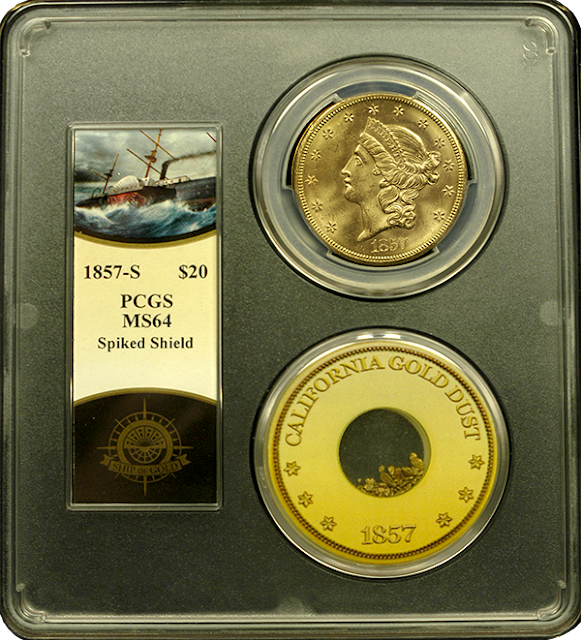 The latest salvage of several thousand shipwreck gold coins from the S.S Central America has occurred and once again is undergoing the conservation and grading process to preserve and protect the coins. This is so they can be brought to market in the best condition possible for sale to collectors and investors.

Even though the exact date has not been released from the Professional Coin Grading Service (PCGS) they have announced that they expect to finish grading the coins sometime in March 2018.  The latest salvage from "Ship of Gold," the name given to the steamship that had an unfortunate run in with a hurricane off the coast of the Carolinas sinking on Sept. 12, 1857 to a  depth of 7,200 ft., includes coins found to still be in excellent condition.

Even though this latest batch of coins hasn't been released for sale yet, they have been put on display for numismatists, historical buffs, and those curious to partake in an interactive experience for all to enjoy. The debut of these extraordinary coins was held at the EXPO in Long Beach, which occurred last week at the Long Beach Convention Center from February 22 until February 24. Not only were there many gold coins to be seen, but gold bars, and gold dust recovered from the S.S. Central America were also on display.

The extent of what exists at the bottom of the ocean 7.200 feet deep has not been revealed by the the California Gold Marketing Group LLC, but what we do know is that they have insured the latest exhibited portion for an incredible $40 million!  This is creating a great buzz around the next release, as collectors and numismatists around the world are waiting with bated breath. All are anxious to own a piece of this tragic historical tale, which was the worst passenger ship disaster of its day. Not only did it literally lose tons of gold coins, but a horrendous loss of life where 425 of the 579 crew members were lost.

It is rare to discover a treasure in such remarkable condition, let alone the epic story that is associated with it. Part of the story is also the salvage itself and the great care to process every specimen; encapsulating each coin so that they remain air-tight and protected from any damage, documenting the exact location each coin was found and treating the entire shipwreck as an archeological site.

If you would like to find out more about rare coins then contact one of our Rare Coins Advisors at Austin Rare Coins & Bullion. Feel free to call us at 1-800-928-6468 with any or your questions. We are happy to help you procure your next rare gem for your collection!

Posted by Unknown at 8:27 AM No comments:

On Thursday, Feb. 22 until Saturday, Feb. 24. the Long Beach Convention Center exhibited roughly $40 million in gold treasure! These extraordinary coins were recovered from the S.S. Central America, which sank in 1857 about 160 miles off South Carolina.

Here is a video from Coin Week about the display that was brought to Long Beach by Dwight Manley who acquired rights to salvage the wreck in 2014. " This is the first in a multi-year series of displays from the collection showcasing more than 500 superbly preserved examples of portrait coins minted in the Thames Valley over the last 1,400 years, including a complete King Edward VIII pattern proof set produced in 1937 by the Royal Mint—the only known set in private hands."

Shipwreck.ws - Shipwreck Stories - Own a Piece of History! 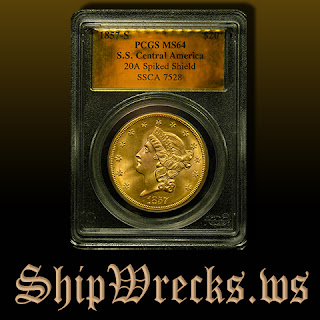 Shipwreck.ws Handles premier Shipwreck Gold & Silver
Coins recovered from the four most famous shipwrecks in numismatic history. Click on the links of each shipwreck above to learn more about each of these fascinating stories.

Recent advancements in treasure recovery have allowed us to take a look into the past and come in contact with amazing relics from these tragic tales. Every photo in the carousel above links to our coin inventory, past and present.

Call 1-800-928-6468 with any questions or to to be notified of our most recent shipwreck coin acquisitions.
Posted by Unknown at 9:43 AM No comments:

Shipwreck Coins
Below is a sample of a Gold Liberty Head Coin from the S.S. Central America of 1857. This original
relic can be purchase from Austin Rare Coins.  They has been involved with every major release
of U.S. Shipwreck Gold since the S.S. Brother Jonathan was recovered in the 1990’s.  Order now
or if you have any questions, call one of our Rare Coin Specialists at 1-800-928-6468. 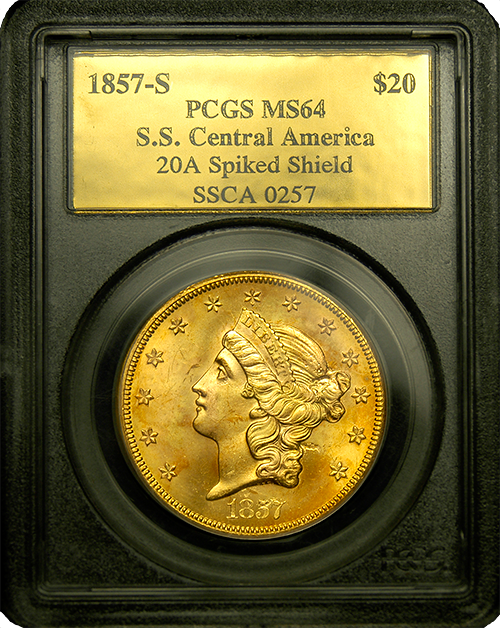 Certified by PCGS and protected by their holder. 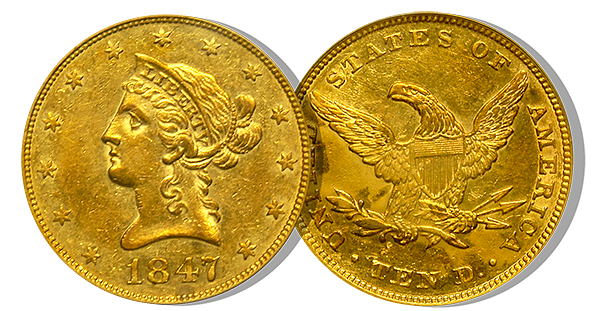 Both Sides of this remarkable Coin! 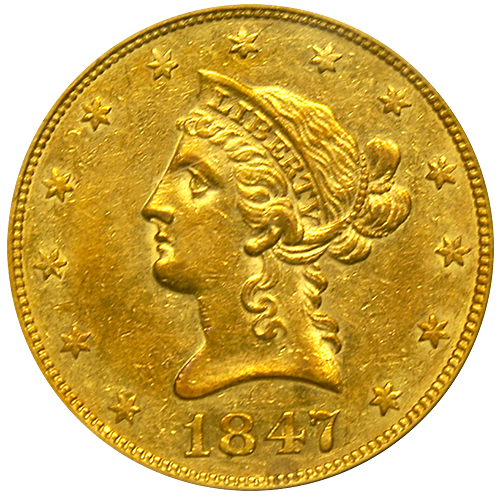 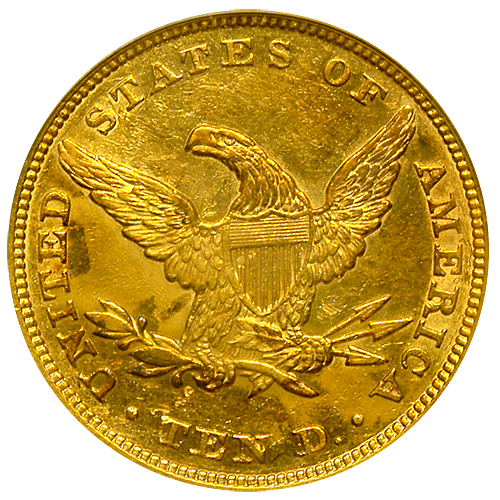 Find this coin and more Shipwreck Coins like it at AustinCoins.com.

Posted by Unknown at 8:45 AM No comments:

June 12, 2014 – Odyssey Marine Exploration, Inc., a pioneer in the field of deep-ocean exploration, recovered nearly 1,000 ounces of gold during the first reconnaissance dive to the SS Central America shipwreck site on April 15, 2014.

Recovery Limited Partnership's director of operations Craig Mullen (left) and chief scientist & historian Bob Evans (right) hold one of the five gold bars recovered by Odyssey's Remotely Operated Vehicle ZEUS (background) during the first reconnaissance dive to the SS Central America shipwreck in April 2014. Copyright: Odyssey Marine Exploration, Inc., www.OdysseyMarine.com.
The two-hour reconnaissance dive was conducted during the transit of Odyssey’s research vessel, the Odyssey Explorer, from the United Kingdom to Charleston, South Carolina, to mobilize for the project, which is being conducted under contract with the receiver of Recovery Limited Partnership (RLP). RLP director of operations Craig Mullen and RLP chief scientist/historian Bob Evans accompanied the Odyssey team for the dive operation. Mr. Evans previously served as chief scientist, historian and later as curator for the initial Central America recovery operations conducted between 1988 and 1991.

Odyssey's eight-ton Remotely Operated Vehicle (ROV) ZEUS is launched from Odyssey's 251' archaeological platform the Odyssey Explorer. The ROV descends to the ocean floor to conduct work on a deep-ocean shipwreck sites while operation is directed by the archaeologist and project manager aboard the Odyssey Explorer. Copyright: Odyssey Marine Exploration, Inc., www.OdysseyMarine.com.
During the dive, Odyssey’s ROV ZEUS flew over the shipwreck to assess the current condition of the site. Gold ingots and other artifacts were clearly visible on the surface of the site during the dive and no excavation was required for their removal. Given the reconnaissance purpose of the dive, only five gold ingots, two gold coins, a bottle, a piece of pottery, a sample of the shipwreck’s wooden structure, and an element of a scientific experiment that was left at the site more than 20 years ago were recovered. The positions of the recovered artifacts were documented for archaeological purposes and will be noted in the detailed site plan that is being created. The archaeological excavation of the site will be undertaken once the pre-disturbance survey provides detailed documentation of the site.

One of the two $20 Double Eagle coins recovered in April 2014 during Odyssey's first reconnaissance dive to the SS Central America shipwreck site, which lies 2,200 meters deep and 160 miles off the coast of South Carolina. Copyright: Odyssey Marine Exploration, Inc., www.OdysseyMarine.com.

‘This dive confirms for me that the site has not been disturbed since 1991, when I was last there,’ said Bob Evans chief scientist/historian for RLP.
RLP director of operations Craig Mullen added, ‘The skill exhibited and results achieved during the initial reconnaissance dive reinforces our belief that the Odyssey team was the absolute best choice for this project. In addition to the cargo recovery operation, we plan to collect deep-ocean biological samples for Dr. Timothy Shank, a deep-ocean biologist and head of the Molecular Ecology and Evolution Laboratory at Woods Hole Oceanographic Institution. Our objective is to document and provide Dr. Shank with samples of species that have returned to the site since previous operations ended. Odyssey’s documentation capabilities will contribute significantly to scientific understanding of deep-ocean biological processes. This continues a history of supporting scientific research at the site.’
To learn more about the historical background of the SS Central America and the story of the shipwreck’s discovery read this article.
For further information on Odyssey Marine Exploration and their other projects go to the firm’s website.
*******************************
To find out more about the history of this Shipwreck go to http://shipwrecks.ws/SS-Central-America-Shipwreck.html